Researchers Investigate the Cause of Fam151b-related Retinal Degeneration 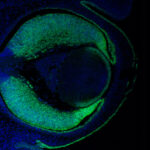 Fam151b was flagged by the IMPC as a gene linked to eye morphology and retinal degeneration. A better understanding of how this gene impacts the retina could help future research on retinal degeneration, particularly in the area of retinitis pigmentosa (RP) and other conditions that lead to blindness.

The IMPC continues to systematically knockout and phenotype genes in mice to create a functional catalogue of the mouse genome. Fam151b was mutated and phenotyped as part of the IMPC project, undergoing the IMPC’s IMPReSS (International Mouse Phenotyping Resource of Standardised Screen) pipeline. This can include undergoing slit lamp examination, OCT, Scheimpflug imaging and ophthalmoscopy to look for eye morphology phenotypes. This initial screen found that knocking out Fam151b caused ‘abnormal retina morphology’ with no other observed significant phenotype.

This study aims to further investigate how knocking out Fam151b affects retina morphology by performing detailed histological and functional analysis. Findlay et al also investigated the function of Fam151a, due to it being a paralogous gene.

Investigating the Homology of the Fam151 Family

Fam151b, and paralogous gene Fam151a, are mammalian homologues of the C. elegans menorin gene (mnr-1.) Menorin, the product of which is located in the skin, is thus named due to its requirement for the ‘menorah-like’ branching of PVD dendrites. It functions in a pathway with SAX-7 (a homologue of L1CAM) and DMA-1, an LRR-transmembrane receptor.

The researchers’ first step was to determine whether Fam151b had similar functions to its C. elegans homologue. A search of the UniRef 50 database showed that the Fam151 family is widely distributed in animal species. The Pfam database highlighted that the family had a domain of unknown function, 2181. An HHPred search matched the Fam151 profile with the Phospholipase D domain of a spider (Sicarius terrosus) toxin. Other statistically significant matches included members of the ‘Phospholipase D and glycerophosphodiester phosphodiesterase’ (GDPD) families.

These GDPD members, like other PLC-like phosphodiesterase enzymes, have a TIM barrel fold that is also found in menorin, Fam151a and Fam151b. These enzymes hydrolyse phosphodiester bonds for a large number of substrates.

The Fam151 Family and Disease

In mice, Fam151a is highly expressed in the intestine, kidney and spleen. Fam151b is expressed at low levels in most tissues, including the retinal pigmented epithelium (RPE), retina, iris, ciliary body, lens and cornea.

Retinitis pigmentosa (RP), a group of genetic eye conditions that cause blindness, is either characterised by abnormalities in photoreceptors (rod and cone cells) or the retinal pigment epithelium.

If Fam151b mutations were linked to photoreceptor degeneration, it could become a vital gene target for future therapies.

“Mouse models are an excellent resource in this area of research as they often recapitulate the human disease and therefore can be used to test the effectiveness of treatments and preventative strategies.”

The Mary Lyon Centre (MRC Harwell Institute), one of our consortium members, generated a Fam151b knockout mouse model (Fam151bKO/KO) containing a LacZ reporter inserted into intron 2 and a deletion of exon 3. The Mary Lyon Centre is a world-class facility which provides the expertise, tools and resources to generate and characterise genetically altered mouse models for use by clinical and biomedical scientists. MLC’s Genome Editing Mice for Medicine Programme and internationally recognised mouse archive allows researchers to access or request novel mouse models that are developed in-house.

The initial IMPC phenotyping performed on homozygous knockout mice found ‘abnormal retina morphology’ at a high significance of 2.55 x 10-38. The IMPC defines this phenotype as “any structural anomaly of the thin layer of neural tissue lining the back of the eyeball which contains visual receptors.”

The IMPC early adult pipeline shows that eye morphology tests are performed at week 15. Findlay et al examined homozygous mice earlier at week 11 and found “a patchwork pattern from fundal imaging indicative of retinal degeneration.” This phenotype was not found in wild-type mice. Histological analysis at this stage found “severe reduction in the length of the outer segments of the photoreceptors [and reduction] in the number of nuclei…found in the outer nuclear layer (ONL.)” Other retinal layers were unaffected. An electroretinogram (ERG) analysis found a greatly reduced scotopic a-wave, signifying a loss of photoreceptor function.

KO mouse eyes were analysed at several ages to determine at what approximate age the photoreceptor degeneration occurred. At day 11, histological analysis showed that the KO mice still had comparable nuclei numbers in the ONL compared to the wild-type controls. Further analysis showed eye development progressed normally before eye-opening at day 14. GFAP staining tests also found no evidence of retinal stress around day 11.

Further tests were performed at day 15. Mutant mice still showed no significant change in nuclei numbers but there was an upregulation of GFAP, signifying initial retinal stress. ERGs at this stage showed significantly reduced scotopic a-wave when stimulated with a high-intensity light source. Standard light intensity did not produce a significant difference. Findlay et al concluded that most photoreceptors (but not all) at this stage could not respond to light stimulus.

KO mice at day 21 had a “dramatically reduced ONL” and upregulation of GFAP. ERGs showed little to no a-wave amplitude.

Findlay et al highlighted that this suggests the photoreceptors developed normally before eye-opening, after which they degenerated rapidly.

Examining the Causes of Degeneration

To investigate why and how this degeneration occurred, Findlay et al performed a series of investigative tests:

Fam151a was also investigated to see if it produced any phenotypes, particularly for those related to the retina. The previous phenotyping performed as part of the IMPC project found two significant phenotypes, ‘abnormal heart morphology’ and ‘enlarged heart’, neither of which are vison-related.

Findlay et al confirmed the lack of a retinal phenotype for this gene. ERGs from homozygous mutants showed no decrease in retinal response to light stimulus. Retinal morphology appeared to be normal and histological analysis found no loss of photoreceptors or increased presence of GFAP.

Double homozygous mutants (Fam151bKO/KO Fam151aKO/KO) were produced to check if the two paralogous genes compensated for each other in viability or phenotypes. These mutant mice had the same retinal degeneration phenotype which was not improved nor worsened compared to their single homozygous Fam151bKO/KO Fam151a+/+ counterparts. No other phenotypes were observed up to one year of age.

Findlay et al successfully prove that Fam151b is essential for photoreceptor survival in mice. The exact cause of this degeneration remains unclear, although the researchers prove that it is not due to several ‘usual suspects’, including light toxicity, disrupted localisation of light-sensitive proteins or disruption in nerve cell patterning.

The researchers highlight that the substrate diversity within the PLC-like phosphodiesterase superfamily of enzymes meant that the performed computational analysis was unable to predict the substrate of the Fam151 family.

“Identification of substrates and products will enhance our understanding of dendritic branching in nematode and retinal maintenance in mammals.”

Whilst there has yet to be any known human patients with a Fam151b or Fam151a mutation that causes retinal degeneration, it is vital that researchers continue to phenotype and characterise the mouse and human genomes to better understand gene function. This study creates a platform for future research into Fam151b’s gene function and how it may relate to human disease, as well as research into the Fam151 family on a larger scale. An understanding of the underlying mechanisms involved in photoreceptor loss is vital for the production of treatments. The mouse model used in this study could also be further used to find effective therapies for photoreceptor loss, a leading cause of blindness.