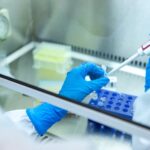 A study investigating the role of Arf1 shows promising results for new therapeutic strategies involving DAMP-mediated anti-tumour immunity to target cancer stem cells. This method of inducting an anti-tumour response could be another frontier in anti-tumour immune therapy.

This could be the first demonstration that endogenous metabolic stress elicits anti-tumour immune responses by inducing DAMPs in rodent tumour models.

Cancer stem cells (CSCs) are found in tumours and, like other stem cell types, have the ability to give rise to many different cell types. Their affinity for self-renewal, differentiation, tumourigenicity and their possible resistance to traditional treatments like chemotherapy suggests they could be responsible for treatment resistance, tumour metastasis, reoccurrence, evasion and patient death. CSCs, therefore, prove a good target for future tumour therapies.

CSCs have a unique metabolism. Leukaemia stem cells have been shown to rely on amino acids for oxidative phosphorylation and some CSC-enriched disseminated tumour cells obtain energy from fatty acids. The researchers’ previous work with drosophila found that the COPI/Arf1-mediated lipolysis pathway selectively sustains and transforms stem cells and that targeting this pathway by knocking out Arf1 kills stems cells via necrosis.

In this study, the researchers investigated the Arf1-mediated lipid metabolism pathway’s role in sustaining CSCs in mice and how disrupting this pathway would affect tumour growth and number. IMPC Arf1 embryonic stem cells were used in this study.

The researchers used the Lgr5-CreERT2/Apcf/f (Lgr5/Apc) mouse model, one known to be a good model for CSCs, and knocked out Arf1 to produce Lgr5-CreERT2/Arf1f/f/Apcf/f mice. They found a dramatic reduction in stem cell tumour numbers and a significant increase in lifespan for the Lgr4/Arf1/Apc mice. After examining intestinal cells, they found abnormal mitochondria, poor cristae, vacuoles, degeneration and necrosis.

Deletion of Arf1 from the ventral foregut endoderm with Foxa3-Cre resulted in significantly underdeveloped livers and lethality at embryonic day 15.5. Further study found that it also caused a significant reduction in hepatoblast markers Hnf4α and Hnf6, lipid droplet accumulation and necrotic death of hepatoblasts.

“The Arf1-regulated lipolysis pathway selectively sustains stem cells, progenitors and cells enriched with CSCs in mice and that disrupting the pathway in these cells results in lipid droplet accumulation, mitochondrial defects and cell necrosis.”

Arf1 depleted mice showed accumulation of CD3+, CD8+ and CD4+, evidence of a T-cell immune response, with dendritic cells (DCs) and inflammatory DCs also being significantly increased. Upon examining the population of lamina propria lymphocytes within the GI tract, they found that certain T-cells (CD8/4+ with and without IFN-γ+) were all significantly increased. These changes were not seen in other areas within the GI tract nor were these changes observed in other key immune cell sites, including the spleen, draining lymph nodes and inguinal lymph nodes.

T-cell-related chemokines (CCL5, CXCL10 and CCL22) were upregulated in the Lgr5/Arf1/Apc model. Real-time PCR showed elevated expressions of IFN-γ, perforin, granzyme A and B and IL-1β. The accumulated evidence suggested that:

The researchers induced liver tumours using the Tet-o-MYC/LAP-tTA system before adding the Arf1 inhibitors GCA or BFA to mouse food, dramatically reducing the number of liver tumours and extending the lifespan of the mice. Selective depletion of Arf1 in Axin2+ liver cells or CSCs also produced this effect.

DCs, B cells and both CD4+ and CD8+ T-cells were significantly increased in the liver, as were many T-cell-related cytokines (CXCL10, CXCL11 and CCL22.) Real-time PCR showed elevated expression levels for the same molecules as in the intestine. Real-time PCR also, however, showed a significant decrease in PD-L1 expression in several mouse models and cell types.

In order to confirm that the effect relied on an adaptive immune response, they used anti-CD4 and anti-CD8 antibodies to deplete T-cells. In response, tumour numbers dramatically increased and lifespans were shortened. They then additionally knocked out either Rag1 or IFN-γ in the Lgr5/Arf1/Apc mice. Both caused survival times to significantly decrease. They concluded that the anti-tumour effects were due to an induction of a T-cell-dependant immune response.

Knocking out Arf1 had an effect on other aspects of the immune system. They found Arf1 inhibition may also induce inflammasome-mediated cell necrosis/pyroptosis. Arf1 inhibition or ablation also induced key DAMPS like Calr, HMGBI, ERp46 and LAMP1, as well as ER-stress markers. It was concluded that Arf1 inhibition triggers ER stress and, as a result, induces DAMPS and DC infiltration, enhancing the T-cell infiltration.

Through tests with a series of inhibitors, including the ATPase inhibitor ARL, it was concluded that the anti-tumour effect worked via ATP and HMGBI. Arf1 knockdown was not directly cytotoxic to tumour cells and, together with the above conclusions, the anti-tumour effect was DCs-ATP-IFN-γ-mediated T-cell immunity. Knockdown also prevented tumour metastasis.

Vaccination with knockout Arf1 cells also proved successful in protecting animals from developing tumours. The vaccination was effective not only against melanoma but also against a variety of histologic types like colon cancer and breast carcinomas. Arf1 inhibition triggered a localised T-cell immune response that then attacked cancer throughout the body.

Upon analysing public datasets on human cancer, the researchers found Arf1 was amplified or overexpressed in the majority of cancer types examined. The cases with lower expression levels of Arf1 had significantly better survival probabilities for a number of cancer types, suggesting Arf1 is a negative prognostic factor.

How it All Happens

The researchers proposed a model:

“a small number of active anti-CSC T cells penetrate the tumor and attack…; as a result…the CTLs produce cytokines and re-stimulate the local environment to convert an immunosuppressive to an immunostimulatory environment;…[reawakening] the pre-existing inactive anti-tumor T cells [and recruiting] new anti-tumor T cells; these additional T cells are directed against tumour antigens other than the DAMPs to amplify the effects for destroying the bulk tumors; these active T cells may then migrate to other tumor sites and become memory T cells to produce widespread and durable antitumor effects.”

If results like the above are reproducible in humans, DAMP-mediated anti-tumour immune therapy could be a breakthrough for the treatment of reoccurring tumours, particularly those with high Arf1 expression. When used in conjunction with other already effective treatments or with the addition of successful checkpoint blockades, this method could prove even more effective.