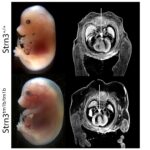 It has been known for decades that low temperatures can trigger specialized fat cells to burn energy to produce heat, but in a new study, UC San Francisco researchers have discovered a new heat-producing pathway in fat cells that works by burning excess blood glucose, suggesting a potential new approach to treating metabolic disorders such as obesity and type 2 diabetes.

The findings, published in Nature Medicine, represent a paradigm shift in scientists’ understanding of how mammals turn their fat reserves into heat, said senior investigator Shingo Kajimura, PhD, an associate professor of cell and tissue biology in UCSF’s School of Dentistry and a member of the UCSF Diabetes Center.

All mammals, including humans, use white fat cells to store energy, but can also have reserves of brown fat, which burns stored energy to produce heat. Human babies are born with brown fat as a natural defense against cold and hibernating animals such as bears build up large stores of brown fat for the same reason. However, adult humans do not usually have much brown fat.

In 2015, the Kajimura lab identified a new type of fat in adult humans — so-called “beige” fat — which exists in pockets within fat tissue and can convert white fat into brown fat in response to cold or other stresses. In follow-up studies, the lab showed that mice with more beige fat were protected from diabetes and diet-induced obesity — by burning calories to generate heat, the animals were more easily able to shed unhealthy excess white fat. However, the mechanism by which these cells turn energy into heat was a missing piece of the puzzle.

“Now we’ve found this new pathway by which beige fat cells make heat,” Kajimura said. “We’re very excited not only for the science, but also for its terrific therapeutic potential to treat obesity and type 2 diabetes.”

More than one way to make heat

When you are cold, your muscles initially shiver to produce heat, but with longer exposure to cold temperatures, your body needs other ways to keep you warm.

For many years, researchers interested in understanding how our bodies turn stored energy into heat have studied the function of a protein called uncoupling protein 1 (UCP1). This protein is present only in brown and beige fat cells, and works by redirecting energy flow in mitochondria, the power plants of our cells, so they produce heat rather than biologically available energy.

In many mammals, UCP1 is responsible for producing heat in response to environmental needs without muscle shivering: its activity shoots up with cold temperatures as well as after overfeeding. However, some species — such as pigs — don’t have a functional UCP1 protein, but are somehow still able to stay warm in cold environments. This led the Kajimura lab to wonder whether there might be another mechanism involved in beige and brown fat’s ability to generate heat.

In previous studies, the team deleted the UCP1 protein from mice with higher-than-normal levels of beige fat, and found the animals were still resistant to diabetes and diet-induced obesity, demonstrating that beige fat’s beneficial effects were completely independent of UCP1.

“This was conceptually very surprising to us and for the field, because UCP1 has been the only known thermogenic protein for over twenty years,” Kajimura said.

Now, study lead author Kenji Ikeda, MD, PhD, and colleagues have found a new mechanism that beige fat cells can use to generate heat when exposed to cold temperatures, which involves activating a pair of proteins called SERCA2b and ryanodine receptor 2 (RyR2).

Normally, these proteins are responsible for controlling the availability of calcium, a key ion within fat cells. When calcium levels are too high, SERCA2b can use some energy to pump the extra calcium into storage sites within the cell. Then, when calcium in the cell is low, RyR2 acts as a valve to release some of these stored calcium reserves. But in cold conditions, Kajimura’s team found, cells can activate both proteins at once. Like revving a car’s engine by hitting the gas and brake at the same time, the main consequence is to generate a lot of heat and burn a lot of fuel – in this case glucose.

In fact, the researchers found that this process can burn so much glucose that lowering SERCA2b activity in beige fat cells in mice impacted whole-body glucose usage, suggesting potential applications for the prevention of type 2 diabetes, which is thought to be triggered in part by long-term elevations in blood glucose levels.

“Now that we’ve found that beige fat burns glucose using SERCA2b, it explains many things,” Kajimura said. “This is why mice become diabetic when we reduce beige fat, but disrupting UCP1 does not cause diabetes, and this is why mice are protected from diabetes in the presence of more beige fat.”

Experiments in isolated pig and human beige fat cells laboratory dishes showed that it isn’t just mice who can use SERCA2b to turn excess glucose into heat, the researchers found, though it isn’t yet clear whether this mechanism or UCB1-based thermogenesis dominate in human beige fat.

The discovery that beige fat has more than one mechanism to stave off the cold makes evolutionary sense, Kajimura explained: “Thermoregulation is so important to life that there must be multiple mechanisms — like in pigs that don’t have a functional UCP1.”

Kajimura and Ikeda are excited by the possibility of using drugs — or even nutritional supplements — to activate SERCA2b in beige fat in hopes of improving the body’s ability to process glucose for patients with type 2 diabetes and obesity, and also to help patients with diseases such as malignant hyperthermia that disrupt normal temperature regulation.

For example, it is well known that eating ginger warms up our bodies, Kajimura said, but the mechanism is poorly understood. Intriguingly, there is some evidence that gingerol, or ginger extract, activates SERCA proteins, suggesting interesting future opportunities for the scientists to test gingerol as a way to trigger beige fat to burn more calories.