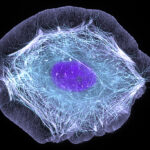 Calcium-ATPases convey calcium ions (Ca2+) from the cytoplasm to the extracellular space via active transport (using ATP as an energy source), and thus fundamentally contribute to the control of a wide variety of Ca2+-dependent processes in virtually any type of cell in humans and animals. Scientists in the group of Dr. Uwe Schulte and Prof. Dr. Bernd Fakler at the Institute of Physiology at the University of Freiburg have successfully unraveled the molecular appearance of this well-known ‘ion pump’: Different from classical textbook knowledge, Ca2+-pumps of the plasma membrane (PMCAs) are identified as protein complexes that are assembled from two ATP-hydrolyzing transporter proteins and two as yet unknown subunits, Neuroplastin and Basigin. These two novel protein subunits are essential for stability and trafficking of the PMCA complexes to the plasma membrane and control the PMCA-mediated Ca2+-transport. The researchers have presented their work in the current issue of the scientific journal Neuron.

A variety of cellular processes such as release of transmitters and hormones, regulation of enzymatic activities and excitability, contraction or cell motility are controlled by intracellular Ca2+. These processes are switched on by Ca2+-influx, mostly through Ca2+-permeable ion channels, and they are switched off by Ca2+-ATPases in the plasma membrane, the PMCAs. The Fakler group has now shown that this switch-off by PMCAs may only take a few ten milliseconds, in contrast to the seconds-lasting periods assumed previously. As the mechanism behind this unexpectedly high efficiency in Ca2+-transport activity, the researchers identified co-assembly of the ATPase subunits with the auxiliary proteins Neuroplastin and Basigin which promote effective integration of the PMCA complexes into the plasma membrane. Deletion of both Neuroplastin and Basigin in CNS neurons leads to severe disturbance of neuron signal transduction and ultimately to cell death.

Even before their identification as auxiliary subunits of PMCA complexes, Neuroplastin and Basigin have not been ‘unknowns’. In fact, investigations by several groups predominantly on knock-out animals and tissues demonstrated fundamental involvement of both proteins in quite a variety of different cellular processes ranging from formation, operation and plasticity of synapses in central neurons, to spermatogenesis and fertilization, or infection of erythrocytes by plasmodium, the pathogen of malaria. So far, however, the molecular mechanisms underlying these processes have remained unresolved. Based on the newly established results by the Freiburg scientists, it appears reasonable to assume that all the aforementioned processes share a common mechanism – the PMCA-mediated control of intracellular Ca2+-signaling.